Stormont ministers agree measures to delay the spread of Covid-19 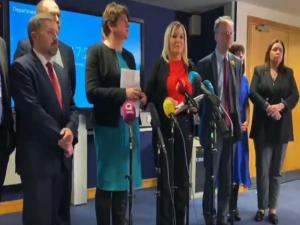 Stormont ministers have agreed to introduce a package of measures in an effort to delay the spread of Covid-19.

Rates relief for businesses, continuing free meals for needy pupils after schools close and steps to support the elderly are among the proposals.

Ministers have also agreed to special meetings of Stormont's executive to discuss budget allocations in light of the pressure Covid-19 will exert on departments and to halt non-critical work and allocate resources to the wider rapid response effort.

First Minister Arlene Foster said: "These are unprecedented times and I am well aware of the real concern that exists across our community as the number of confirmed Covid-19 cases increase.

"Further steps are being introduced to keep people safe. We know the burden that some of the necessary measures will have on families and individuals but it is important that they are followed and society pulls together to lessen the impacts of this disease."

The First Minister and Deputy First Minister will chair a meeting of the Civil Contingencies Group (NI) on Wednesday to lead the response of the public sector, including blue light responders.

Mrs Foster has faced a dispute with her partner in devolved government, Michelle O'Neill, over when to order schoolchildren to stay at home.

Meanwhile, around 3,000 tourism companies could go out of business due to recession sparked by coronavirus, Stormont's economy minister has warned. Hoteliers being urged to close have demanded a Government rescue package to help around 65,000 workers.

Mrs Foster said the onus is on Westminster to stump up more cash.

She added: "These are quite draconian measures that have been announced today. We are asking people to social distance in their own homes, to stop socialising in pubs and clubs.

"We need to also think of those people who work in pubs and clubs and provide a support mechanism for them as well."

Bookings through one popular hotels website have fallen 80%, and the landmark Titanic Belfast visitor centre has seen numbers halve.

Mrs Foster said she was concerned about the impact on small businesses like the hospitality trade and travel agencies, which are suffering a slump in bookings.

She added: "There are many sectors we will try and support but we will need to get funding from Westminster to make sure that we can deliver that support."

Seven new Covid-19 cases were confirmed in Northern Ireland on Monday, bringing the tally to 52.

Mr Swann said: "Be under no illusion what is coming down the road at us."

Non-essential medical procedures are to be postponed as the NHS ramps up its response to the virus.

Mr Swann added: "We will come to a point where we won't be using operating theatres. We will be able to use the ventilator points there to ventilate patients when we get to that stage."

Stormont's education minister has insisted his stance on keeping schools open is not political, and is in line with expert medical advice.

Peter Weir was challenged during a sitting of the Assembly on why schools, colleges and childcare facilities in Northern Ireland remain open, when in the Irish Republic they were closed.

Despite Stormont authorities holding off on announcing closures - a move they say will be required eventually - several schools have already shut, including 10 for children with special needs in Belfast.

She said Prime Minister Boris Johnson's decision to ask people to self-isolate confirmed the "absolute need" for schools to close.

The Assembly Commission, which runs the devolved parliament at Stormont, said it had taken the decision to close Parliament Buildings to the public from Wednesday.

"This decision has been taken in light of the public health situation."

Members of Belfast City Council have agreed that leisure centres and community centres should be closed until further notice.