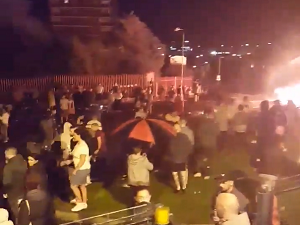 Q Newsdesk and By Michael McHugh and Rebecca Black, PA

An 18-year-old man is in a critical condition in hospital after being stabbed at the site of a controversial bonfire in Belfast.

The victim was one of two men stabbed in the New Lodge area, where the disputed fire was burned late on Thursday night.

The teenager was stabbed in the back while a 39-year-old man suffered wounds to his arm and hip. The older man's injuries are not thought to be life-threatening.

Two men aged 21 and 28 were arrested in the early hours of Friday at an address off the Oldpark Road on suspicion of several offences, including causing grievous bodily harm with intent.

Two men, 21 and 28, have been arrested following a number of stabbing incidents in New Lodge area last night. Two men who were stabbed are being treated in hospital.

She added: "We are aware of footage circulating on social media and this will be examined as part of the wider investigation."

The incidents came as large crowds gathered to watch the bonfire, which was set alight to mark the anniversary of the introduction of the controversial policy of internment without trial of suspected republicans in 1971.

Earlier on Thursday, police abandoned an operation to remove the structure before it was lit amid concerns innocent bystanders could be hurt in disorder.

Trouble broke out in the area when armed officers attended the scene during the day.

PSNI Assistant Chief Constable Alan Todd has said he regrets the failure of an operation involving more than 150 officers to allow contractors to remove the wooden pallet pyre in the nationalist estate.

Young people climbed on top of the pile in triumph and the police operation ended with vehicles speeding from the estate under a hail of missiles.

The PSNI said six petrol bombs were recovered and a 13-year-old youth was arrested on suspicion of riotous and disorderly behaviour.

Police had moved in early on Thursday to facilitate contractors tasked with removing the structure and officers were injured during sporadic bouts of violence that followed.

The bonfire was built on land owned by Northern Ireland's Department for Infrastructure.

The Housing Executive had urged residents to leave the nearby Oisin and Fianna tower blocks as they said they could not guarantee their safety, due to the proximity of the bonfire.

Operation Demetrius in 1971 saw hundreds arrested across Northern Ireland on suspicion of being involved with paramilitary groups.