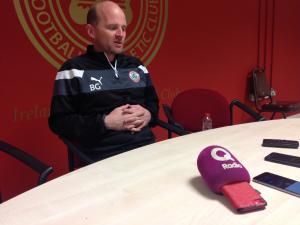 Linfield are back on top of the Danske Bank Premiership after grabbing a late point in a dramatic 1-1 draw at Cliftonville.

Linfield played more than an hour with 10 men after skipper Jamie Mulgrew was sent off for a challenge in the first half.

The visitors were adamant he shouldn't have been dismissed and Reds manager Barry Gray agreed....

Meanwhile, Blues boss David Healy has said his team could have ended up with eight players....

The other two games on Saturday ended 2-1.

Glentoran beat Dungannon at the Oval and Crusaders snatched a late victory against Warrenpoint at the Q Radio Arena.