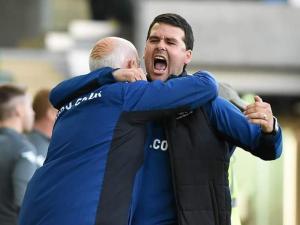 Linfield beat Glenavon 1-0 in the top match on the opening day of the Danske Bank Premiership.

New signing Daniel Kearns grabbed the winner at Mourneview Park after 30 minutes against his former team.

Andrew Mitchell had earlier missed a penalty for the home side.

Another new member of the Blues squad, Danish midfielder Benny Moller Nielsen, liked what he saw...

Centre-back Caolan Marron was Glenavon's man of the match....

Jay Donnelly struck in stoppage time as Cliftonville beat Glentoran 2-1 at the Oval.

Ballymena had a 2-0 victory away to Dungannon, who had Chris Hegarty sent-off.

And Michael McCrudden's goal gave Insitute a 1-0 win over the other newly-promoted team Newry City as Irish League football returned to the Brandywell.

Crusaders kick-off their title defence against Ards at Seaview on Monday night.

Not the result we wanted but at least someone was smiling yesterday ⚽️ pic.twitter.com/DWvRGN0dLA