Crues set to take on Wolves, Reds still in the hunt, but Jeffrey's men savaged in Sweden 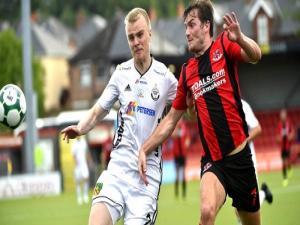 Crusaders - one foot in next round. Pic: NIFL.

There were mixed fortunes for the local teams in Europa League first round, first leg qualifiers last night.

Crusaders beat Faroe Islands minnows B36 Torshavn 2-0 at Seaview and are on course to meet Wolves in the next round.

Cliftonville lost 1-0 at home to Norwegian side Haugesund, who had a player sent off near the end.

And David Jeffrey's Ballymena United were thrashed 7-0 by Malmo in Sweden.

After a brave effort tonight, we'll give it everything we've got in Norway next week. pic.twitter.com/tHVB7UfoRp

💙 Football 💙
7-0 lost in Europe League Q1, but the NI-players show us that football is more then just a game.@Malmo_FF @BallymenaUnited pic.twitter.com/apBiCgVOe5