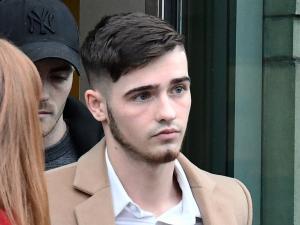 An Irish League football club has confirmed the sacking of a player who was jailed for sharing an indecent image of a child.

Cliftonville FC announced that it had terminated Jay Donnelly's contract with immediate effect.

Donnelly was sentenced to three months in prison at Belfast County Court on Tuesday, after an appeal judge reduced his original four-month term by one month.

Striker Donnelly, 24, of Ardilea Drive in Belfast, admitted the charge in November at Belfast Magistrates' Court.

He was informed of the club's decision on Wednesday. The official confirmation was posted on the club's website on Thursday morning.

"Cliftonville Football Club can confirm that Jay Donnelly has had his contract terminated with immediate effect, following the conclusion of our disciplinary proceedings," read a short statement.

After Tuesday's hearing Donnelly apologised to his victim.

In a statement issued by his solicitor, he said he accepted the court's decision.

"I want to again apologise to the complainant in this case for the hurt that my action caused," he said. "This will never erase what happened, but I hope that today's outcome provides her with a degree of closure that allows her to move on with her life."