CORONAVIRUS: Schools in NI to close from Monday and 74 new cases confirmed in ROI 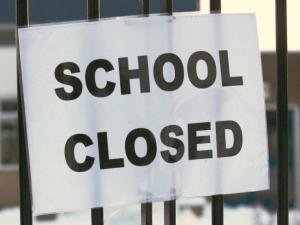 Schools are to close across Northern Ireland from Monday in a bid to delay the spread of coronavirus.

And officials said they could be shuttered until this summer.

Stormont First Minister Arlene Foster said "The societal and economic impact of this measure will be enormous."

She said the closures were "unplanned and long-term".

"This is unprecedented," she added.

Ms Foster and Deputy First Minister Michelle O'Neill made the announcement in Belfast.

They had been at loggerheads after the Sinn Fein leader wanted to act sooner following a similar move from the Irish Republic.

The five main teaching unions have written to Stormont Education Minister Peter Weir asking him to set a date for closures.

In the Irish Republic, schools have been closed since Friday.

🎥 “The level of fear and uncertainty in almost every family is unprecedented. I have never witnessed such anxiety across all sectors. There is only one topic of conversation on everyone’s lips and we are all worried.” @DUPleader @moneillsf pic.twitter.com/tbyfKdrJfC

🎥 First Minister Arlene Foster says principals, pupils and parents have been in a “holding pattern based on medical advice for the last week”, as she announces schools will officially close on Monday in response to COVID-19. @DUPleader says now is the right time for this action. pic.twitter.com/9kRcSuL40m

Meanwhile, There have been 74 new cases of coronavirus confirmed in the Republic of Ireland.

It brings the total number of cases there to 366. 29 females and 45 males are among the new cases diagnosed.

The Department of Health also released more details about most of the cases confirmed to date.

The figures - covering the 271 confirmed cases up to midnight on Monday - show Dublin is the worst impacted county to date, with 129 cases.

84 (or 31%) of the confirmed cases led to hospitalisations, while six patients (2%) were admitted to an intensive care unit (ICU).

Two deaths had previously been confirmed.

Dr Tony Holohan, Chief Medical Officer at the Department of Health in the Republic, said: “Again, today we are seeing another increase in case numbers. The importance of social distancing cannot be underestimated. Everyone must play their role."