Council offices to light up blue for Huntington’s Disease 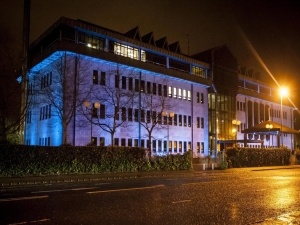 The Council offices will 'light up blue' on 15th May

Derry City and Strabane's council offices will turn blue later this month as part of a global campaign to raise awareness of Huntington’s Disease (HD).

The floodlights at Strand Road site will be changed to blue on Monday May 15th along with major public buildings and monuments around the world.  It's part of a global  bid to increase understanding and reduce the stigma of the disease that affects hundreds of families in Northern Ireland.

HD is a genetic disease that damages or kills the neurons in the brain and every child of an affected parent has a 50% chance of inheriting the gene mutation causing it.

Mayor of Derry City and Strabane District Council, Alderman Hilary McClintock, said she was pleased that Council were able to play a part in helping highlight the issues around it.

“We are delighted that Council can play a small part in the world wide campaign to increase awareness and understanding of Huntington’s Disease by lighting up our Strand Road offices in Blue on May 15th” she said. “It is a condition that there is no known cure for and significantly reduces the life expectancy of the sufferer once the symptoms begin to surface, normally in mid adult life.

“HD has a significant impact both on the life of the sufferer but also their family who are affected by the emotional and practical implications of the disease.

“The Huntington’s Disease Association for Northern Ireland do sterling work in providing non-medical support services throughout the province to help alleviate some symptoms and improve the quality of life of sufferers and this initiative is a good opportunity to highlight that work.”
Sorcha McGuinness, Chief Executive of the Huntington’s Disease Association for Northern Ireland, added: “We are indebted to Derry Strabane Council for helping shining to a light on HD, a rare disease that effects hundreds of families across Northern Ireland, who desperately seek understanding, compassion and support".

HD normally affects adults between the ages of 30-50 although in a minority of cases children and much older adults will be affected.
It causes progressive loss of control over thoughts, feelings, behaviour, movement, communication and swallow until the individual becomes dependent on the help of others.

A blood test is used to diagnose the disease and testing is available for free at the Regional Genetic Centre in Belfast who also provide genetic counselling.
The average life expectancy following the onset of symptoms is around 15-20 years but there are 15 clinical trials presently working on a cure.

Further information on Huntington’s Disease and the support available to sufferers is available at www.hdani.org.uk, Telephone number 07982843907 or 07921513561 , E mailing info@hdani.org.uk and the Twitter page @HDAssocNI.