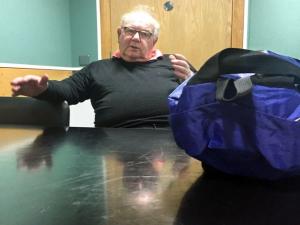 Jim McCafferty, 71, appeared before Belfast Magistrates' Court charged with eight counts of intentionally touching a boy under the age of 16.

The alleged offences were committed in the city on dates between 2012 and 2015.

McCafferty, a Scotsman with an address at Raby Street in south Belfast, has been on remand at Maghaberry Prison amid fears for his safety.

He was escorted into the dock on a walking frame for the hearing to determine if he has a case to answer.

Dressed in a white T-shirt and and grey tracksuit bottoms, the pensioner spoke to confirm he understood the allegations against him.

He declined to give evidence or call witnesses at this stage.

His solicitor, Stephen Tumelty, did not dispute submissions that a prima facie case has been established.

Granting the prosecution application, District Judge Fiona Bagnall returned McCafferty for trial at Belfast Crown Court on a date to be fixed.

He is expected to remain in custody until those proceedings get underway.

"There is no application for bail," Mr Tumelty confirmed.

The accused was arrested last December after giving an interview to a national newspaper and then walking into a Belfast police station.

McCafferty, who previously lived in the Glasgow area, worked at Celtic more than 20 years ago.

He was also a kit man for other Scottish clubs, including Falkirk and Hibs, before moving to Northern Ireland around seven years ago. ends