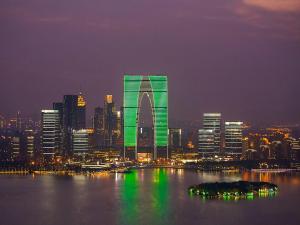 Over 400 landmarks in 50 countries around the world are going green for St Patrick's Day, despite major events being cancelled.

Tourism Ireland’s Global Greening initiative - which started with the Sydney Opera House in Australia - is now in it's 10th year.

The company's Chief Executive Niall Gibbons recalls how it all began.

"The occasion was the 200th anniversary of the first reception held for the Irish in Australia, by the then Governor of New South Wales, Lachlan Macquarie.

"It was a significant gesture from Australia – which has since been extended by many countries around the globe."

Tourism Ireland thought about abandoning the project this year in light of the coronavirus pandemic and its impact on the tourist industry.

But participants were committed to mark St Patrick’s Day and keep Ireland to the fore.

Hundreds of iconic landmarks and sites in over 50 countries are set to go green over the next couple of days bringing some positivity and hope to the 70+ million people around the world who claim links to the island of Ireland.

“We are deeply grateful to Ireland supporters across the world who, despite unprecedented challenges, are marking St Patrick’s Day and remembering Ireland in a very positive light," Mr Gibbons added.

"We hope our Global Greening will bring a little positivity and hope to people everywhere and remind them that, if we all do the right thing now by following advice of our medical experts, this crisis will pass.

"And, that is something we can all look forward to. We would like to extend our support and solidarity to everyone affected by Covid-19, especially workers in the hospitality sector.”

Lighthouse at Straits Quay in Malaysia; Bloedel Conservatory in Canada; Gate of the Orient in China and Cosmo Clock 21 in Japan pic.twitter.com/jf5wpcn2Fl

Landmarks in cities from Brussels to Buenos Aires and from Sydney to San Francisco are set to take part.

Madison Square Garden in New York, the Clifton Suspension Bridge in Bristol, Caerphilly Castle in South Wales and even the Smurf Statue in Brussels will join Tourism Ireland’s Global Greening initiative for the first time in 2020.

City Hall in Bangkok, Palais du Peuple in Djibouti City, the National Theatre in London and the Palace Bridge in St Petersburg will also turn green for the first time.

They'll be joined by some old favourites including the London Eye, Burj al Arab, Niagara Falls, the ‘Welcome’ sign in Las Vegas, the Chain Bridge in Budapest and many others.