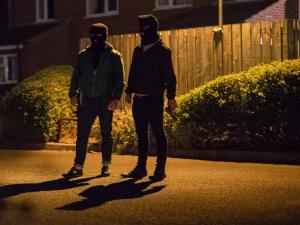 A man has sustained head injuries after being attacked with a machete by a masked gang in Ballymena.

It happened after five men forced their way into an apartment in the Casement Street area at around 11.55pm last night.

The 24-year-old victim was taken to hospital following the incident for treatment of injuries to his head.

Police are treating it as a suspected paramilitary style assault.

Detective Sergeant Peter Crothers said: “This was a vicious and brutal assault, which we are treating as a paramilitary-style attack at this time.

"We must all work together to bring those responsible to justice and stop this from happening to anyone else.

“We are appealing to anyone who was in the area at the time and may have witnessed the incident, or has information they think could assist this investigation, to contact police on 101, quoting reference number 2041 of 18/03/20.”