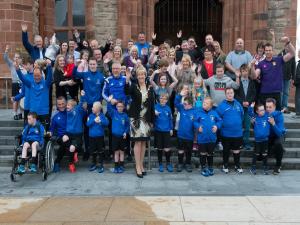 Derry City and Strabane Mayor, Ald. Hilary McClintock welcomed the Oxford Bulls Football Club to the Guildhall for a special reception on Monday.

The Oxford Bulls became instant stars when Republic of Ireland winger James McClean got behind their campaign to play against local soccer teams after they had spent two years in training without a competitive match.

The club was established with the help of the Foyle Down's Syndrome Trust, which provides a wide range of activities for young people and adults living with the condition.

McClean picked up on their appeal on social media and immediately got in touch with manager Kevin Morrison to see how he could help.

A video of the team playing with the international soccer hero went viral on social media, and the team have now been overwhelmed with support from local clubs, playing their first competitive match with Sion Sonics at the end of April.

The Mayor made a special presentation on behalf of the city.