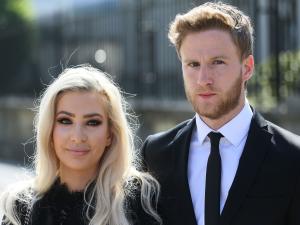 A glamour model and international footballer seeking legal recognition of their humanist wedding are being denied rights afforded to religious couples, a court has been told.

A lawyer for Laura Lacole, 27, and Leeds and Republic of Ireland star Eunan O'Kane, 26, said the law in Northern Ireland offered more generous treatment to people of faith.

Under current law, Ms Lacole and Mr O'Kane's planned humanist wedding in the region next month will not be recognised in law. For such recognition they would need to have a separate civil ceremony.

The couple were at Belfast High Court on Friday to challenge the status quo.

Opening the case in front of Mr Justice Adrian Colton, their lawyer Steven McQuitty said all they wanted was the same protection afforded to those of different belief systems.

"Religious people from Pagans to Free Presbyterians and everything in between enjoy a substantial legal privilege under law," he said.

"In a sense the State gives its legal blessing to such marriages."

He claimed the law "denies the same privilege to equally valid groups".

Humanism is a non-religious belief system that rejects the concepts of a higher deity or afterlife.

Humanists adhere to a scientific view of the world and believe humans steer their own destiny.

Mr McQuitty said as the law stood in Northern Ireland the couple's wedding on June 22 would be "legally meaningless".

Humanist marriages are legally recognised in Scotland, but not in England and Wales. They are also recognised in the Republic of Ireland.

Mr McQuitty told the court the case was of "huge public interest", highlighting that there were 4,290 humanist weddings in Scotland in 2015, more than those conducted by the Church of Scotland.

Ms Lacole, from Belfast, and Mr O'Kane, from Co Londonderry, are taking a case against the General Register Office for Northern Ireland and Stormont's Department of Finance.

Arriving at court on Friday morning, Ms Lacole said: "We are both humanists so we want to have a wedding ceremony that reflects who we are as people.

"We can't see how you can differentiate between any types of beliefs. We think it should be recognised in Northern Ireland because there is a need for it.

"Whether we are a minority or a majority we should still be given equal rights."

She added: "We hope that we get a good verdict which means that we can have the wedding ceremony that we want to have.

"If we don't get it, we want to appeal so we can give other people the opportunity to have the wedding ceremony that they want."