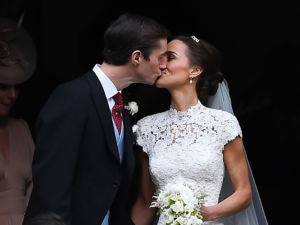 Pippa Middleton has tied the knot with fiance James Matthews today in Berkshire.

The Duke and Duchess of Cambridge were some of the royal guests in attendance at Kate's sister's wedding.

Getting underway after 11:30am, wedding bells sounded before half past midday.

One guest absent from the event was Prince Harry's girlfriend Meghan Markle.

With starring roles as page boy and bridesmaid respectively, were Prince George and Princess Charlotte.

The Duchess of Cambridge arrives at her sister's wedding, followed by Pippa Middleton herself #PippasWedding. Latest on Sky News pic.twitter.com/CxJqe81U4h

St Mark's Church on the private Englefield estate was the venue, about five miles (8km) from the bride's home village of Bucklebury.