If You Come Back

Veterans 'could bring UK to a standstill over Prosecutions' 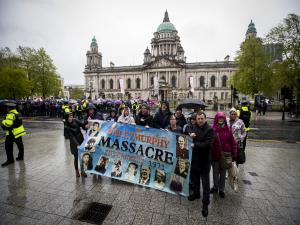 A former soldier facing prosecution in Northern Ireland has warned that veterans could bring Britain to a standstill over Troubles-related legal action.

Dennis Hutchings is a former member of the Life Guards Regiment and is due to be tried for attempted murder in connection with a fatal shooting in 1974.

Mr Hutchings addressed a rally in support of another former serviceman known only as Soldier F outside Belfast City Hall on Saturday. 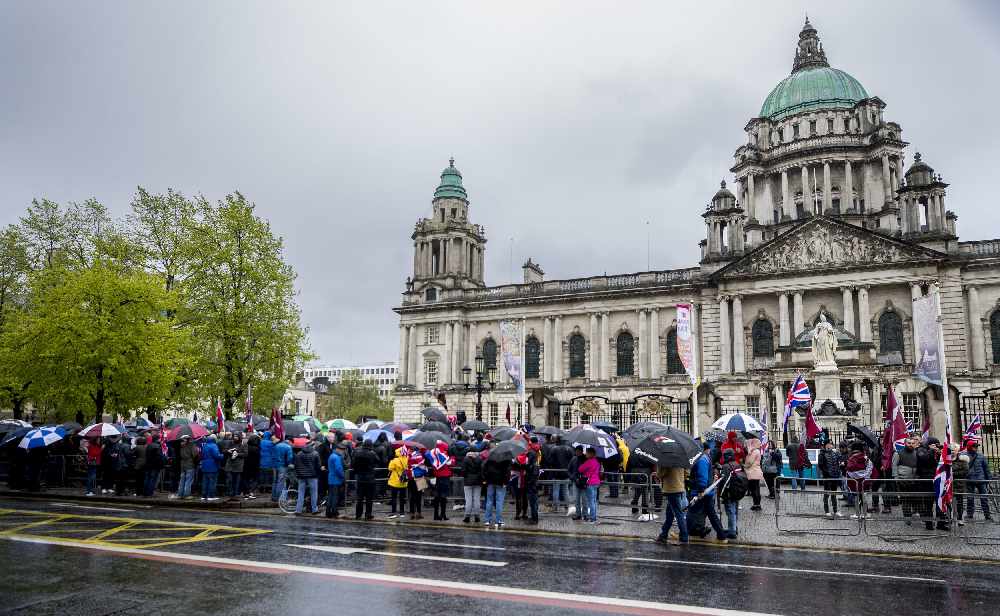 Soldier F is to be charged with murdering two people after Parachute Regiment troops opened fire on civil rights demonstrators in Londonderry in January 1972, on what became known as Bloody Sunday, killing 13.

Mr Hutchings told the crowd of supporters: "We need this to continue and it will continue."

He said: "Eventually our politicians are going to have to listen because if they won't we will bring this country to a standstill."

The prosecution of Soldier F has polarised opinion as part of a wider campaign mounted by some MPs and veterans groups for former servicemen to be "protected" from prosecution for actions committed while on duty.

Mr Hutchings addressed the crowd via a phone call relayed on loudspeakers.

Several hundred supporters of Soldier F listened while holding Union flags and banners with the crest of the Parachute Regiment. 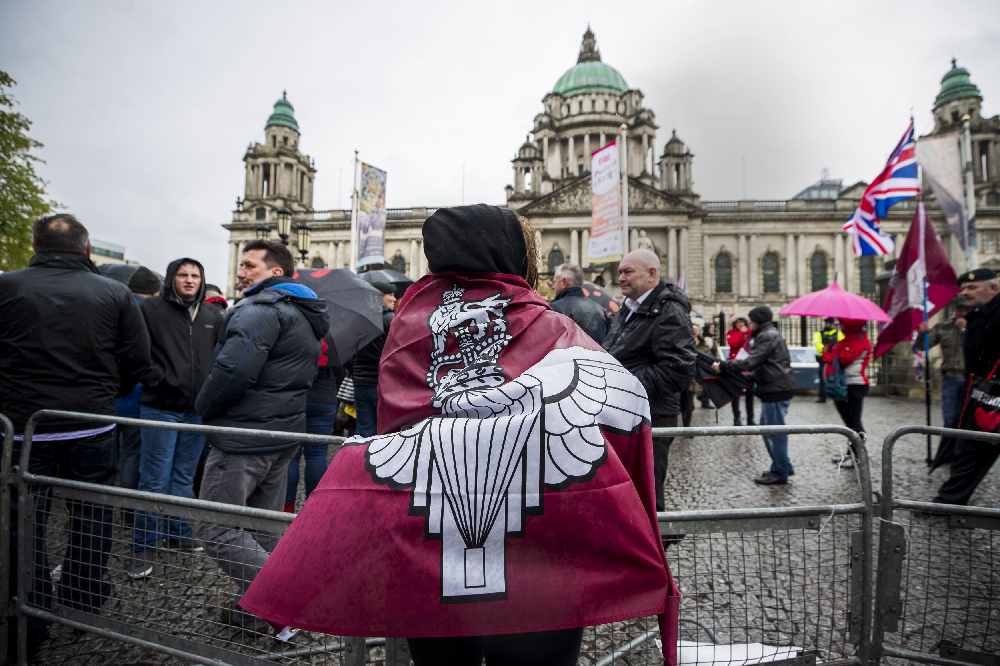 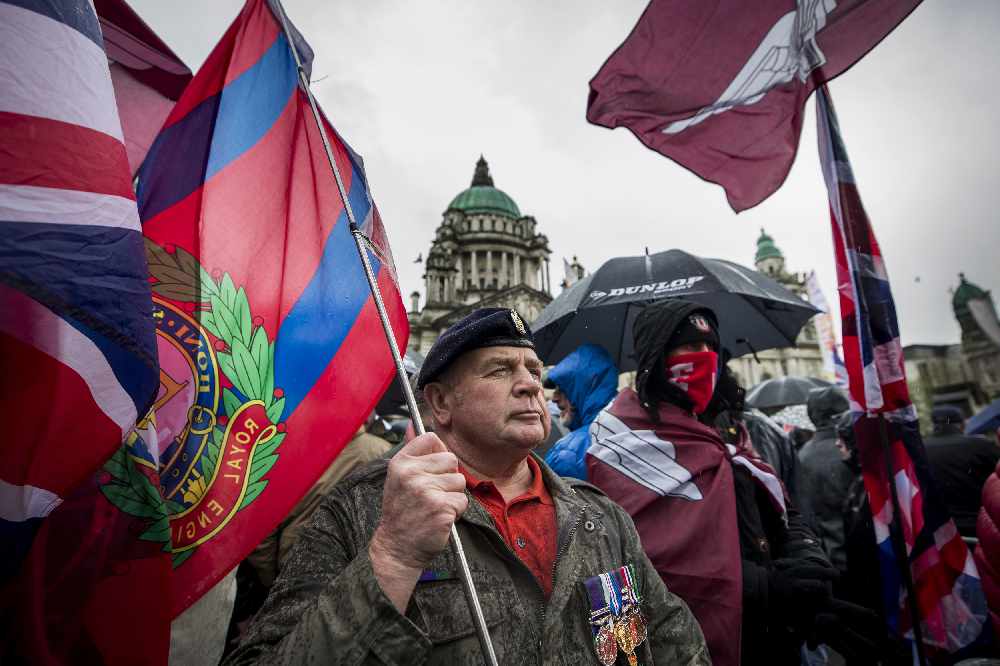 Some aged veterans wore berets and sported medals on their chests in the pouring rain.

Among those present were senior Democratic Unionists Sir Jeffrey Donaldson and Gavin Robinson, MPs who support official action to provide legal protection for members of the Armed Forces in all conflicts.

Sir Jeffrey said: "It is evident that they are very angry about the witch hunt against the veterans of the Armed Forces in Northern Ireland and feel very strongly that veterans are being singled out."

He said those who engaged in terrorism were responsible for more than 90% of Troubles deaths.

Some relatives of those killed on Bloody Sunday have campaigned for justice for decades.

Many unionists in Northern Ireland oppose a statute of limitations because they argue everybody should face the rule of law and a cut-off date could allow former paramilitaries "off the hook". 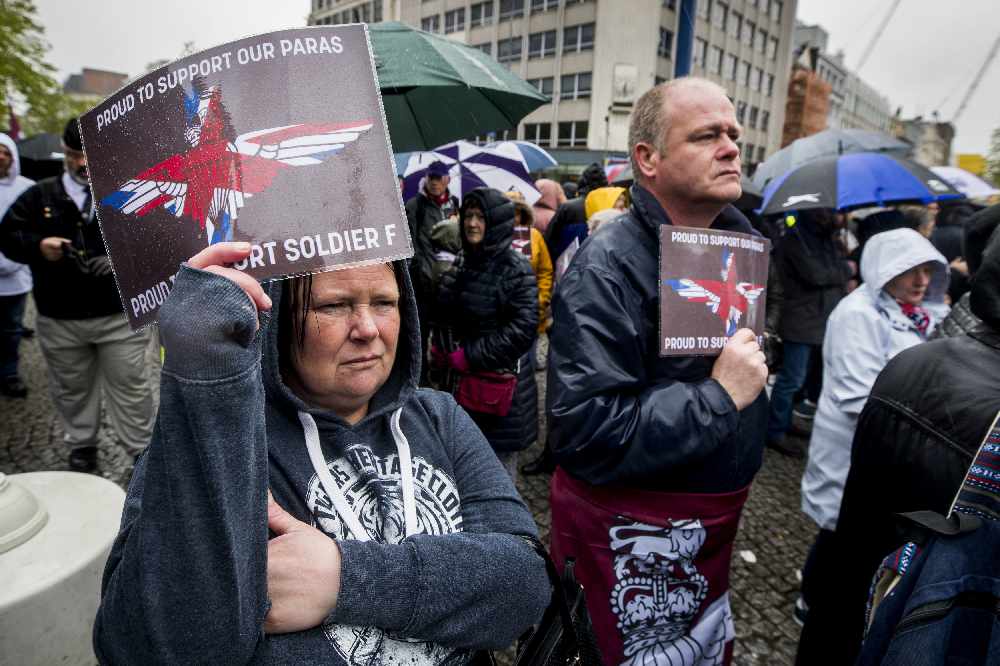 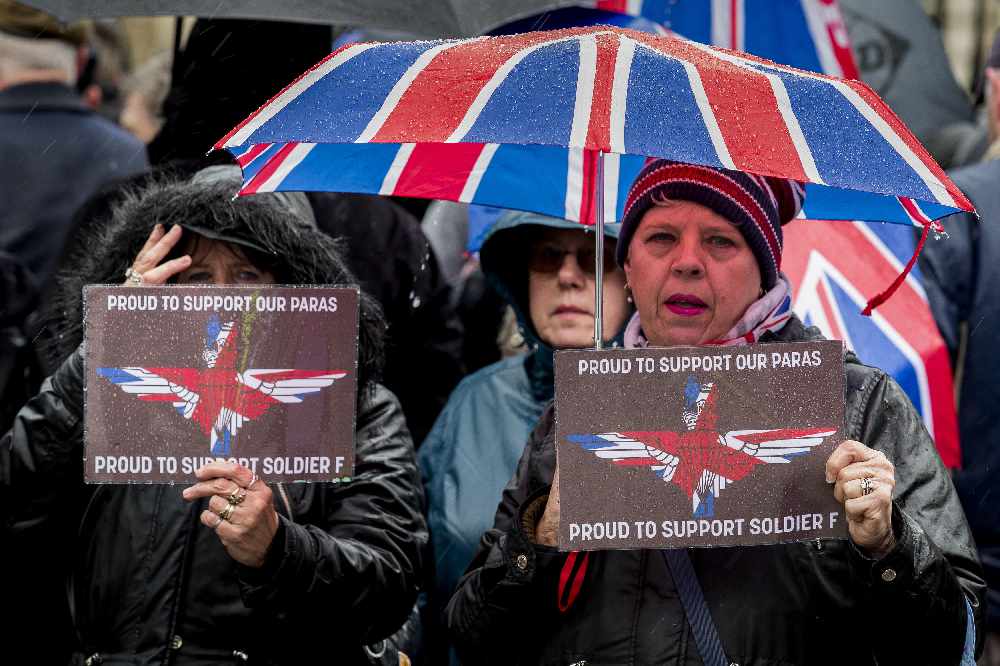 It is not part of the Government's proposals on addressing the toxic legacy of the past.

Parachute Regiment veteran John Ross, from the loyalist Shankill Road in Belfast, did his first tour of duty in the country aged 18 in 1971.

He said: "Right from the outset my regiment has been branded murderers, killers, all sorts."

"Yes, we we were a robust regiment, and if you wanted the job done we would have done it. But we were just like any other regiment that served in Northern Ireland in Op Banner.

"Whilst at the minute the Parachute Regiment is taking the brunt of the prosecutions, believe me there are many more coming down the line."

According to the Pat Finucane Centre, a human rights group, only a handful of soldiers have been convicted of shooting civilians while on duty in circumstances where the courts ruled they were guilty of murder.

Tens of thousands of republicans and loyalists spent time in prison and were responsible for the majority of deaths.

Demonstration organiser Mel Brown claimed no soldier or police officer would receive a fair trial in Northern Ireland and such cases should be tried elsewhere.

Families of those who died in disputed circumstances involving soldiers in west Belfast, known as the Ballymurphy Massacre group, support prosecutions.

Spokesman John Teggart held a banner near the City Hall and said: "No one is above the law and justice must be served.

"The fact that these crimes happened nearly 50 years ago is irrelevant. It might have been a long time ago, but the illegal acts of these soldiers is affecting the families to this day.

"They committed murder and what compounded that was the apparatus of the British state then tarnished the names of many of the victims by labelling them as gun men and gun women."