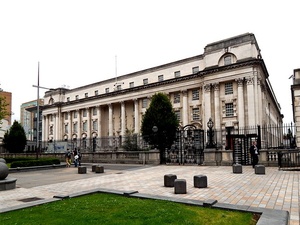 The UK's highest court has said it does not have jurisdiction to hear an appeal over the sentence of loyalist killer Michael Stone.

Stone killed three people in a gun and grenade attack at Milltown Cemetery in west Belfast following an IRA funeral.

He was freed under the Good Friday Agreement in 2000, but was returned to prison six years later for trying to kill then Sinn Fein leaders Gerry Adams and Martin McGuinness at Stormont.

Last year Stone was ordered by the High Court in Belfast to serve a further five and a half years before he can be considered for release.

An appeal against that ruling was taken to the Supreme Court.

A statement from the court said: "The Supreme Court unanimously holds that the present proceedings do not constitute 'a criminal cause or matter', with the result that the court does not have jurisdiction to consider the appeals."

They said a six-year period spent out on licence before the murder attempt at Stormont should not count towards his 30-year minimum term.

Supreme Court judge Lord Sales said: "The issue raised in the present case does not relate to the commencement or conduct of any underlying criminal process involving Mr Stone.

"He is not subject to any outstanding undetermined criminal charge on which he will be tried and may be subjected to sentence.

"The present proceedings are concerned with whether his past criminal sentence has been correctly understood and implemented.

"The High Court decision was therefore not in 'a criminal cause or matter' and the relevant right of appeal is to the Court of Appeal, not the Supreme Court.

Stone, a former Ulster Defence Association (UDA) member, was found guilty of three other killings in addition to Milltown.

They included murdering a milkman, shooting a joiner in the head and firing at another man up to 16 times with a submachine gun.