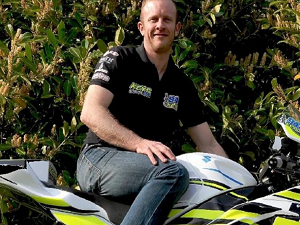 The motorcyclist who died following a crash at a racing event in County Westmeath yesterday has been named locally as 34 year old Darren Keys.

The Ballyclare rider was fatally injured in the collision at the Walderstown road races.

The father of three made his road racing debut at Armoy in 2016.

The club issued a statement last night paying tribute to him

It said he 'was a gentleman both on and off the bike - and will be greatly missed.'

A statement from Gardai said:

"Gardaí are investigating the death of a participant during the Walderstown motor cycle road racing event in Co. Westmeath. "

"At approximately 11.30am a 34 year old man from Northern Ireland was seriously injured when his motor cycle was involved in a crash during a race at Walderstown."

"He was treated at the scene before being airlifted to the Mater Hospital where he was later pronounced dead. The event has been abandoned and Garda forensic collision investigators are examining the crash site."

"Enquires are ongoing, the Coroner has been notified and post-mortem examination will we arranged. A file will be prepared in accordance with the Coroners Act."