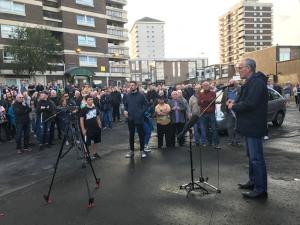 MLA Gerry Kelly addressed the crowd in the New Lodge.

A solidarity vigil organised by Sinn Fein has been held in New Lodge after days of unrest in the area.

The rally, which was attended by hundreds of people, took place on Victoria Parade to "show support for the community following the disgraceful scenes of last week", Sinn Fein MLA Caral Ni Chuilin said.

The republican area in Belfast has seen violent clashes over the last week due to the construction of an illegal bonfire, ahead of the anniversary of the introduction of the controversial policy of internment without trial of suspected republican paramilitaries in 1971.

Police were forced to withdraw from the area last week, having come under attack as they tried to support contractors in the removal of the illegal pyre.

Police abandoned an operation to remove the structure before it was lit amid concerns innocent bystanders could be hurt in disorder.

Trouble broke out in the area when armed officers attended the scene on Thursday.

Police claim the violence was likely orchestrated by dissident republicans.

The days of violence culminated on the night the bonfire was lit, in a stabbing incident in which a teenager suffered a punctured lung.

"Sinn Fein has organised tonight's event to show support for the residents of the New Lodge who have borne the brunt of anti-social activity associated with the bonfire that took place last week," Ms Ni Chuilin said.

"The subsequent scenes of lawlessness, including vicious stabbings and physical assaults were disgraceful and an affront to this proud community.

"Those scenes had nothing whatsoever to do with commemorating internment and everything to do with anti-social behaviour from those who terrorise this community the whole year round.

"Sinn Fein has always stood foursquare with the New Lodge community. We have spoken to the statutory agencies and residents before and after the bonfire and there will be further dedicated discussions in the coming days to ensure there is never any repeat of the intimidation which residents endured last week.

"The vast majority of the community are appalled by what happened in the New Lodge last week and tonight is about showing solidarity with them."

🎥 MLA @CaralNiChuilin makes it clear in her closing comments @sinnfeinireland vigil in New Lodge - “never again will there be a bonfire in this area, people don’t want it...” pic.twitter.com/rdhCqJlwzW

Michelle O'Neill, Sinn Fein's leader in Northern Ireland welcomed the rally, and says those involved in violence were a minority.

"Great to see the community in the New Lodge standing firm against those involved in anti-community activity last week," she said.

"The minority involved in these anti-community activities cannot and will not succeed in tarnishing this fantastic community and the work that goes on within it."

The stabbing victim, Tiernan McMahon, 18, remained in a critical condition in hospital on Saturday morning as two men appeared in court charged with attacking him and his uncle John Paul McMahon at the New Lodge bonfire in the north of the city.