WATCH: Surfer rescued after more than 30 hours at sea 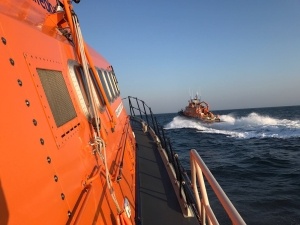 A surfer has been rescued after spending over 30 hours in the sea.

Matthew Bryce from Glasgow has not been seen since setting off from the Argyll coast at 9 on Sunday morning.

Belfast Coastguard said he had been in the water since 11:30 on Sunday and was found at half 7 on Monday.

The 22 year old was suffering from hypothermia when he was found and has been taken to hospital in Belfast to recover.

A large area of sea and shore line was combed after the alarm was raised at lunchtime on Monday.

Dawn Petrie, who co-ordinated the search at Belfast Coastguard Operations Centre, said: "Hope was fading of finding the surfer safe and well after such a long period in the water and with nightfall approaching we were gravely concerned.

"But at 7.30pm the crew on the Coastguard rescue helicopter were delighted when they located the man still with his surf board and 13 miles off the coast.

"He was kitted out with all the right clothing, including a thick neoprene suit, and this must have helped him to survive for so long at sea.

"He is hypothermic but conscious and has been flown to hospital in Belfast."