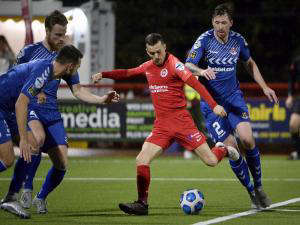 Larne have transfer-listed two players who have been a key part of their revival in recent years.

Goalkeeper Conor Devlin and winger Marty Donnelly have both been made available to other clubs.

The reason for the shock move has not been disclosed.

It came just 24 hours after the Inver men won their first ever European tie, beating Bala Town 2-0 on aggregate.

Donnelly came on as a substitute in the Europa Conference League second leg - Devlin is still recovering from injury.

On the move - Larne confirm keeper Conor Devlin & winger Marty Donnelly have been made available for transfer. They arrived from Cliftonville in the summer of 2017 & January 2018 respectively. The club says “there will be no further comment at this time.”

Derry City lost 4-2 against Shamrock Rovers at the Brandywell on Friday night.

The Candystripes had been 2-0 up at one stage against the League of Ireland leaders.

Ronan Boyce and Junior had put Derry two up in the first half but the league leaders stormed back to claim victory in a six-goal thriller at the Brandywell #LOI pic.twitter.com/bZ8lmikZ7n

There was a big win for Glentoran Women in their County Antrim Cup clash with Cliftonville.

The Glens thrashed their rivals for the league title 6-0.

Throw in at Brewster Park in Enniskillen is 1.45.

The winners will meet Monaghan in the decider - they beat Armagh on Saturday night.

Tributes were paid to the Monaghan under-20s captain Brendan Og Duffy, who was killed in a car crash on Friday.

Also in GAA, Armagh ladies footballers are through to the All-Ireland quarter-finals after an eight-point victory over Cavan.

Orchard County ladies march on after an impressive victory in Clones.