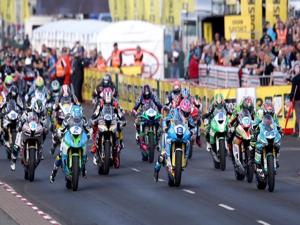 This year's North West 200 has joined the list of sporting events hit by coronavirus.

North Antrim MP Ian Paisley has issued a statement saying "the local economy stands to lose £12 million in turnover as a result and this will be impossible to replace."

“Last night I spoke with the race Clark of the Course Mervyn White and discussed the 2020 race. He has informed me that the decision has been taken to postpone the race this May given the government advice on the spread of the Virus.

"The announcement by the government to prohibit large gatherings really means that in the interests of public safety it is just not feasible for an event that attracts up to 100000 visitors and spectators cannot proceed as planned.

"This is not the first time the event has faced such challenges. During the foot and mouth crisis the race was cancelled and during one year a bomb scare seriously disrupted racing.

"The organisers of the race always put NI first and have the interests of Northern Ireland at heart.  I know this will be a difficult decision but I can only support the Coleraine and District club for showing leadership.

"This will be a blow to the local community. In fact the local economy stands to lose £12 million in turnover as a result and this will be impossible to replace. I’ve already asked the government to provide rate and vat relief as well as other measures to help the local economy.”

"Our paramount desire is to act responsibly and do all we can to protect everyone from the threat posed by the virus."

Meanwhile, coronavirus is also taking its toll on football.

UEFA has confirmed the Euro 2020 tournament has been postponed until the summer of 2021.

Also, next week’s Euro play-off semi-finals for Northern Ireland and the Republic have been postponed and are due to be staged during the international window in June instead - "subject to a review of the situation."

There's also some good news amid the gathering gloom.

Linfield have issued a statement after one of their players tested positive for Covid-19.

He's said to be "making good progress and is feeling much better."

"David Healy has provided the following update for our supporters at this challenging time.

“I just want to let everyone know that we’ve kept in regular contact with our player who we reported ill last week and we’re really pleased to advise that he’s making good progress and is feeling much better.

"He (and indeed the rest of our close-knit squad) want to thank everyone who’ve included him in their prayers and forwarded kind messages of concern, as well as sincere and best wishes for a speedy and full recovery.

"Our player has also asked that I pass on his wish that everyone should look after themselves, as well as their nearest and dearest at this most difficult of times and hopefully, we will be back playing football again, as soon as is medically possible.”

And finally, a heart-warming video from Newry City FC...

With no football for a few weeks @ncr72 & @deckycarville10 thought one of our top fans Daniel Murphy deserved a treat! We think Daniel makes a better keeper than Decky too 😁 Video @AllyMcKenzie91 ⚽️🔵⚪️ pic.twitter.com/8ug68QYp3t