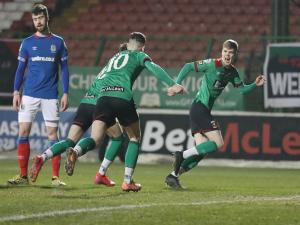 Linfield's lead at the top of the Danske Bank Premiership has been cut to just two points.

On Tuesday night, the Blues crashed to their second Big Two derby defeat in a week, losing 3-1 against Glentoran at the Oval.

Second-placed Coleraine beat visiting Portadown 2-0 thanks to a pair of penalties from Ben Doherty.

Adam Lecky hit a hat-trick as Crusaders won 3-0 at Larne, who had midfielder Fuad Sule sent off after half an hour following an off-the-ball clash with Declan Caddell.

Warrenpoint were 4-1 winners over Dungannon Swifts, coming back from a goal down with Alan O'Sullivan scoring twice and missing a penalty.

Ballymena drew 1-1 with Cliftonville thanks to a late Shay McCartan strike and it was the same score in the game between Glenavon and Carrick, who played most of the match with 10 men after the first half dismissal of defender Chris Rodgers.

A huge night in the @DanskeBank_UK Premiership produced victories for @Glentoran, @ColeraineFC, @CrusadersFC & @thepointfc. After that defeat at The Oval, Linfield's lead at the top is cut to just two points. Six more matches coming up at the weekend. #DanskeBankPrem pic.twitter.com/MuEHkcxq7D

Match report from The Oval.

Glentoran defeated Linfield for the second time in seven days to stretch their current winning streak to five straight games.

The Glens got off to a great start, going in front as early as the ninth minute when Conor McMenamin crossed from the left for Jay Donnelly to knock the ball home unmarked at the far post.

It might have been 2-0 just a couple of minutes later but Chris Johns did well to deny Hrvoje Plum following some poor defending.

Glentoran did double their advantage just after the half-hour mark after Johns fumbled the ball on the edge of the box into the path of McMenamin who made no mistake to bag his third goal in five outings.

However, Linfield pulled one back in first half stoppage time through Stephen Fallon after he pounced on the rebound from Kirk Millar's free-kick.

Glentoran restored their two goal advantage just after the hour, Rhys Marshall finished into the bottom corner at the second attempt after his initial effort was saved by Johns.

Shayne Lavery might have reduced the deficit on 77 minutes after cutting inside the box but he could only send his shot narrowly wide of the upright.

Two Big Two wins in a week for the Glens. 2-1 up at The Oval at the break, superb Rhys Marshall sealed a well-deserved victory just after the hour. Title race wide open - GFC in the mix pic.twitter.com/Tvc4uKqmdp