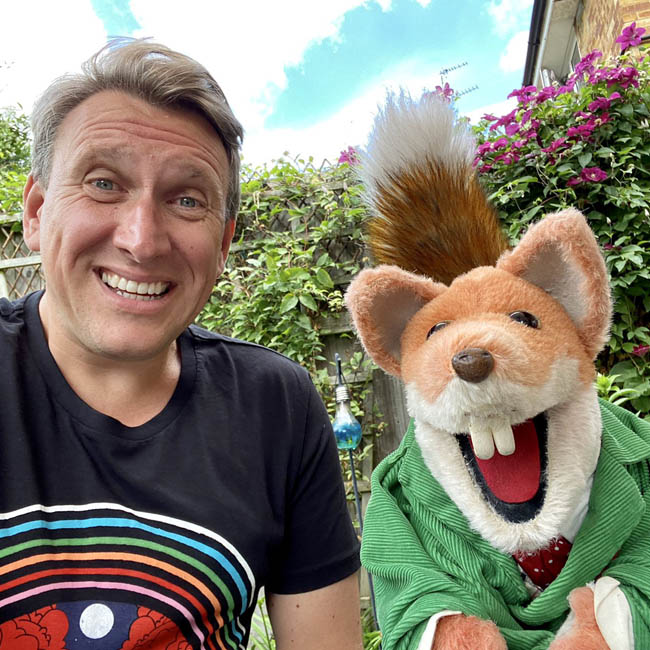 Basil Brush is set to play Glastonbury in 2021.

The famous children's TV fox puppet - who is best known for his catchphrase 'Boom! Boom!' - is the only act confirmed to be playing the world famous festival at Worthy Farm in Somerset, south west England, after this year's 50th anniversary event was cancelled due to the coronavirus pandemic.

Martin Cabble-Reid, Mr. Martin in 'The Basil Brush Family Show', took to Twitter to reveal himself and the children's TV legend will be back in the Kidzfield entertaining families next year.

Alongside a selfie with the puppet, Martin wrote on Twitter: "A lovely morning back with me old mate filming for #Glastonbury & #BBC bits & bobs. I can't even comprehend the lack of a Glasto festival this year Loudly crying facePouting face Anyway, we will be back in the kids frield in 2021 and it will be all the more wonderful Hugging face

A lovely morning back with me old mate filming for #Glastonbury & #BBC bits & bobs. I can’t even comprehend the lack of a Glasto festival this year 😭😡 Anyway, we will be back in the kids frield in 2021 and it will be all the more wonderful 🤗 @realbasilbrush #basilbrush pic.twitter.com/RIJcl7Aakq

They were due to perform this year along with the likes of magician Dynamo.

Last month, it was announced that Glastonbury - which was expected to see performances from the likes of Taylor Swift, Kendrick Lamar and Sir Paul McCartney - will be honoured by the BBC with their special coverage.

Performances from the likes of Oasis, Adele, Beyoncé, David Bowie, Coldplay and Jay-Z will be shown in three special 90 minute live programmes on BBC Two - one for each night of the main Glastonbury weekend in late June.

Organiser Emily Eavis said: "There are so many memorable sets being played across the BBC over what would have been our 50th anniversary weekend. Personally, I'm looking forward to a weekend of reflecting on the history of our festival and going back to some classic performances from David Bowie, Adele, REM, Beyoncé, The Rolling Stones, Jay-Z, Billie Eilish and lots more. Me and my dad will definitely be watching!"