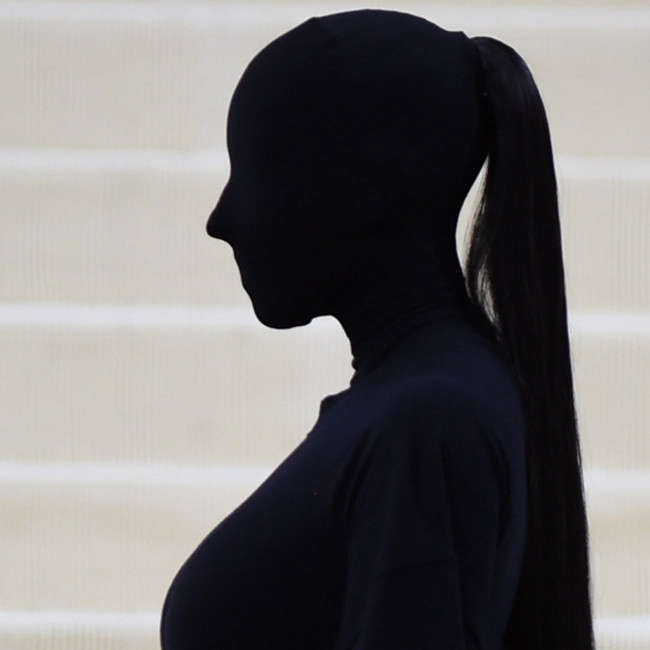 The 40-year-old star stepped out at the event on Monday night (13.09.21) covered completely head to toe in an all-black Balenciaga ensemble which left some social media critics confused as others hailed the unique look.

Now, she has taken to Instagram to defend her outfit as she simply wrote: "What's more American than a T-shirt head to toe?!"

The outfit featured a long-sleeve turtleneck bodysuit with an oversized t-shirt dress with a long train, rounding off the look with boots, gloves and a mask over her face and head.

Kim arrived for the event alongside Balenciaga's creative director Demna Gvasalia, who was also covered up in a black hoodie and sweatpants.

Although she didn't arrive with ex-husband Kanye West, his "presence" was still felt due to the pair's connection.

An insider said: "Even though Kanye is not attending tonight, his presence will be felt on the carpet.

"It was Kanye who introduced Kim to Demna and was instrumental in the newly formed relationship between her and Balenciaga."

And it's said the 44-year-old rapper helped Kim "push creativity and people's imagination" with her ensemble.

The source added: "This look on Kim is like a new subculture and fashion statement. No logo, no face, but everyone knows it's her.

"Kanye gave her the courage to push creativity and people's imagination through art. It's the ultimate confidence."

Kim has previously credited Kanye with teaching her how to be “true to herself”.

She explained: "I got to a point - and maybe being in a relationship with Kanye for a decade and someone that absolutely didn’t care about likability factor or what any of perception of him was - as long as he was true to himself, that taught me so much in the best way of just being me and living in the moment."