Almost 3,500 turned away from polling stations in March poll 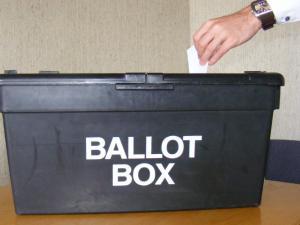 Almost 3,500 people were turned away from polling stations in the March Assembly election, because they hadn't updated registration details.

The Electoral Commission has today published its report on the administration of snap poll.

More than 812,000 votes were cast, representing a turnout of 64.8% of the eligable population.

That's the highest turnout since the first Assembly election in 1998.

Widespread public anger over the collapse of Stormont and the controversial RHI scheme lead to a major rise in turnout.

The Nationalist vote also surged bringing an end to a Unionist majority in the assembly.

Despite the large turn out it was the first election to the Assembly where all candidates were elected without the need for the count to move into a second day.

Public opinion research for the Commission report suggests that most voters had a positive view of the process.

3,475 people were turned away from polling stations on 2 March because they were not on the electoral register.

That was because of a legal requirement last December which saw over 60,000 voters removed from the electoral register.

It's because they hadn't updated their registation details since 2013.

Ann Watt, Head of the Electoral Commission, said: “There is no doubt that organising and running an election with just over six weeks’ notice was challenging for the Chief Electoral Officer and her staff.

"We are pleased to report today that overall the Assembly election was well-run.

"Preparations are well underway for the UK Parliamentary General Election on 8 June and our report should give voters confidence that these plans can deliver another successful election in Northern Ireland."

There is now less than one week left to register to vote for the general election.

Poll cards have already been issued so if you have not received one, or, if you are not sure if you’re registered to vote, you should contact the Electoral Office.

The deadline for completing and returning an electoral registration form is Monday 22 May.

Voters who cannot make it to their polling station on 8 June only have until Thursday 18 May to apply for a postal or proxy vote.