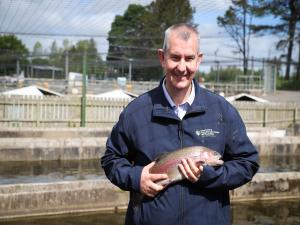 A top civil servant has publicly apologised to Stormont's Environment Minister over an official submission he received on climate change.

Edwin Poots faced a backlash after he said his department officials did not accept using language such as climate emergency or climate crisis.

Denis McMahon, the permanent secretary at the Department of Agriculture Environment and Rural Affairs (DAERA), said the line was included in the briefing "in error".

He told Stormont's DAERA committee officials included the line believing it was "consistent with the minister's policy position in previous statements".

During last week's Assembly debate about the introduction of a Climate Change Act, Mr Poots rejected the terms "emergency" or "crisis" when it came to the climate change issue.

In a pre-prepared statement, Mr McMahon said on Thursday: "I want to start with an apology based on the letter that I sent to the minister on July 27.

"In preparing for Assembly debate on climate legalisation, officials had submitted a briefing for the minister which included a closing statement. The briefing was comprehensive and clear but we had included a line which stated that we should not be using language such as emergency or crisis.

"This line was included without any additional explanation or caveat and the minister assumed it was the position of officials.

"Officials had included the line believing it was consistent with the minister's policy position in previous statements."

He told the committee it is "normal and appropriate" practice for department officials to frame statements and lines in press releases in words that "reflect the minister's position".

He added: "We did not make clear the line was included on that basis and therefore did not state that the line had not been meant to constitute official advice.

"This was an error and I apologise to the minister and for any embarrassment it had caused. I am also apologising to the committee."

He also told the committee he has asked for an independent review to be carried out into guidance provided to the minister on climate change.

"Basically we got it wrong," he added.

Mr McMahon told the committee Mr Poots has made it clear "we have to follow the scientific evidence".

He said the Department and Government have to act now to stop and reverse the climate change process as they represent a "fundamental threat".

He added: "We have received the support of the minister in prioritising climate change and working with other departments to reduce carbon emissions."

He said that work has intensified, adding: "While there is clearly political debate about language, none of us are in any doubt about the science, about what it tells us and the need for a response to that science that reflects the urgency required."

He added: "Those comments were believed to be the minister's position, so we have an environment minister who doesn't believe we have a climate emergency or climate crisis."

Mr McGuigan also accused Mr Poots of resisting scientific evidence and "ignoring the will" of the Assembly to implement climate change legislation.

However, department official David Small said the minister has never resisted advice during their meetings.

Mr Small added: "When we put advice forward the advice is properly considered and is generally accepted.

"You say that he is ignoring our advice, again I couldn't honestly agree with that."

Green Party MLA Clare Bailey said: "It's really hard to believe we are sitting here in 2020 having this conversation.

"I would much rather see actions on climate crisis than debating this today."