O'Neill "will not be stepping aside" - Sinn Fein president 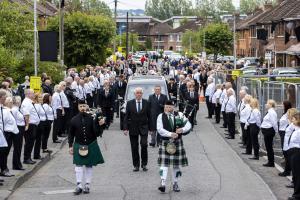 Sinn Fein has rejected a DUP call for Michelle O'Neill to step aside as Stormont Deputy First Minister over her attendance at an IRA funeral that drew hundreds of people on to the streets.

First Minister Arlene Foster wrote to her partner in government on Thursday telling Ms O'Neill to stand down pending a police and Assembly investigation into the scenes at Bobby Storey's funeral in west Belfast on Tuesday.

The move has plunged the recently restored powersharing institutions into crisis again, with four of the parties in the five-party coalition Executive calling for Ms O'Neill to stand down.

Sinn Fein president Mary-Lou McDonald said she will not be calling for Ms O'Neill to step aside as the Stormont Executive has a significant amount of work to do, due to Covid-19.

She said: "That work is under way but it is not finished yet, so, no, I don't think anybody should be punished or asked to step aside or step down because they attended the funeral of a friend. No, I don't."

Thursday's scheduled joint press conference on the coronavirus emergency with Mrs Foster and Ms O'Neill has been cancelled.

The events have some echoes of the cash-for-ash furore that toppled the devolved government in 2017 when Mrs Foster refused to accede to a Sinn Fein call for her to stand down pending an investigation into a botched green energy scheme.

But DUP sources have indicated there is no appetite within the party to pull down the institutions in the way the late Martin McGuinness did when he quit as a joint head of government in January 2017.

On Wednesday, Mrs Foster urged Ms O'Neill to apologise and make amends for what happened at Monday's funeral in west Belfast.

The Deputy First Minister declined and defended her actions, insisting she acted within Covid-19 rules and guidance.

She differentiated between the management of the funeral cortege and service and scenes along the route when hundreds gathered to watch the procession pass. Ms O'Neill insisted that was outside of her control.

Yesterday, Ms O'Neill acknowledged that a selfie taken at the cemetery of her posing close to two men, one of whom had his arm on her shoulder, "should not have happened".

She said the photo happened in a "blink of an eye" as she was leaving the graveside.

Afterwards, the DUP's Westminster leader Sir Jeffrey Donaldson said: "I think now is the time to step up and demonstrate respect and integrity.

"The law on these matters is clear and what happened at that funeral has sent out a very, very bad message to people in Northern Ireland."

He told BBC Radio Ulster: "In light of the failure of Sinn Fein yesterday to grasp the opportunity to apologise, it is our view that the Deputy First Minister must now step back from her role while these matters are investigated by the PSNI.

"We will be asking the standards authorities in the Assembly to examine whether those MLAs who attended the funeral broke the code of conduct for MLAs, and we will also be asking the PSNI to specifically investigate any potential regulatory breaches by executive ministers including the Deputy First Minister."

Earlier on Thursday, SDLP leader Colum Eastwood called for Ms O'Neill to step aside and allow her actions to be examined by Assembly standards authorities.

The Ulster Unionist Party and Alliance Party have also called for her to stand down.

Guidance set by the Northern Ireland Executive says a maximum of 30 people should attend a funeral, and friends should only attend when there are no family members in attendance.

On Wednesday, Ms O'Neill acknowledged that a selfie taken at the cemetery of her posing close to two men, one of whom had his arm on her shoulder, "should not have happened".

She said the photo happened in a "blink of an eye" as she was leaving the graveside.

Mr Eastwood told Radio Ulster: "I don't want any more instability, I argued for three years for the Assembly to come back, but equally I don't think that anybody should be above the law.

"The point isn't that she accidentally broke some obscure piece of guidance, she broke the guidance that she set out, that she argued for, that she stood over and made the case for, rightly and sensibly. But then decided to set that all aside because I think, for Sinn Fein, they believe that there is one rule for them and one rule for everyone else, and that it is always movement first with them, and I think that is very hard for the public to take in.

"I couldn't tell you how many people have contacted me furious about this, and remembering all of the sacrifices that they made during the most difficult days of this pandemic."