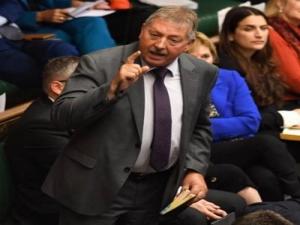 A DUP MP has been criticised after claiming the Stormont health minister is “acting like a poodle”.

Amid tensions between the DUP and other parties over the post-lockdown reopening of schools, Sammy Wilson accused Robin Swann of acting like a “poodle for the unaccountable chief medical officer”.

On the reopening of schools – the Health Minister needs to show some political independence and start acting as a politician rather than a poodle for the unaccountable Chief Medical Officer.

It was made in response to the Executive's plans to have a phased approach to the re-opening of schools.

Mr Swann responded to Mr Wilson's tweet, saying: "I would have always considered myself more of a Jack Russell."

If I had to chose, I would have always considered myself more of a Jack Russell. pic.twitter.com/uA19OaDP0N

First Minister Arlene Foster addressed the comment at today's Executive press briefing, saying that "some tweets would be better typed out and then deleted."

Arlene Foster says she understands people are angry, but some tweets would be better typed out and then deleted. pic.twitter.com/sdlsT1wvza

Ms Foster also made it clear that the DUP have full confidence in the Chief Medical Officer, Dr Michael McBride.

“Michael retains and will have my full confidence and that of my party.”