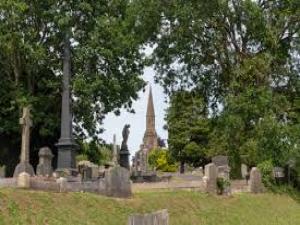 The family of a former IRA member who was shot dead four years ago want to move his body.

Kevin McGuigan Snr was gunned down at Comber Court in the Short Strand, Belfast, in August 2015.

The father-of-nine was treated by paramedics at the scene before being taken to the Royal Victoria Hospital, but he died from his wounds.

Lawyer Laura McMahon wrote to a coroner on behalf of relatives who believe he should be exhumed and reburied.

She said: "The family are keen that they are together in death.

"I am sure you will appreciate their motivation and where they are coming from."

Coroner Paddy McGurgan said he would be committing a criminal offence if he ordered the body moved for purposes outside the coronial process.

"This is one of those areas where the law is exceptionally clear in relation to the limit of my powers."

Mr McGuigan's death followed the murder of Jock Davison in the Markets area of the city three months earlier.

Mr Davison, 47, was a former IRA commander and former friend of Mr McGuigan.

On Wednesday the coroner held a brief hearing on legal matters surrounding a future inquest. He directed that the full inquest go ahead without a jury.

Thousands of pages of non-sensitive material and a significant amount of sensitive papers need to be sifted through, lawyers told the preliminary sitting.

Mr McGurgan decided that suspects who have not been charged but may be mentioned during the inquest should be publicly known by ciphers to protect their identities.

He said it was too early to set a date for the full inquest and scheduled another review hearing for March.

Mr McGuigan's death led then PSNI chief constable George Hamilton to state that the Provisional IRA still existed and some of its members were involved in Mr McGuigan's murder.

He said there is no evidence that the killing was sanctioned by the organisation.

His statement prompted the Ulster Unionists to pull out of the five-party ruling Executive.