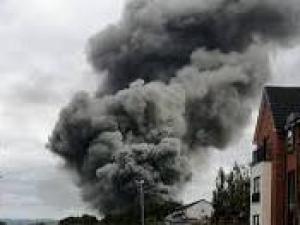 Foyle Port says its trying to establish the cause of yesterday's major shed fire.

Around 60 firefighters tackled the blaze using a dozen appliances.

A company spokesperson said: "We can confirm that the shed fire at Foyle Port this morning has been extinguished and the area is under control.

We are now in the process of establishing the cause.

🎥 Firefighters are continuing to tackle the large fire at Foyle Port in Derry/Londonderry.

Local resident @amgallagher_UU shows the extent of the blaze, as smoke spreads to the surrounding areas. pic.twitter.com/PWpVjlHa1m

Away from the immediate location of the fire, the wider operations of the Port remain unaffected.

We are thankful that there were no injuries and that everyone is safe and well.

We commend the work of the Emergency Services for their quick and effective response this morning and also to the local community for their cooperation and understanding".

🎥 From a short distance away, the scene of a major blaze at Foyle Port in Derry/Londonderry.

46 firefighters are battling to contain the fire inside a large grain shed.

Yesterday (Wednesday 29 July 2020) at 10.57am, Firefighters were called to an incident at Port Road, Londonderry Port.

At the height of the incident, fifteen appliances and approximately sixty Firefighters were in attendance, including high reach aerial appliances and a command support vehicle.

Our Firefighters worked quickly to bring the incident under control, wearing breathing apparatus and using a range of jets to extinguish the fire.

I am pleased to say that there were no casualties and the swift action of crews ensured that neighbouring properties were protected and damage was minimised.

The incident was dealt with by 7.35pm. The cause of the fire is under investigation.

We worked closely with the PSNI and the Harbour Master at Foyle Port throughout the incident and I would like to thank them for their assistance throughout.