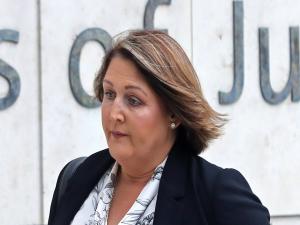 Caroline Donohoe, the widow of Adrian Donohoe, arrives at the Criminal Courts of Justice, Dublin

A jury at the Central Criminal Court in Dublin is set to resume deliberations on Wednesday in the case against a Northern Ireland man accused of murdering a Garda detective.

The 41-year-old detective was shot during the robbery of Lordship Credit Union in Bellurgan on January 25 2013.

His widow Caroline along with other family members and Garda colleagues were among those at the Central Criminal Court on Tuesday awaiting the jury's verdict.

On Monday, Brady was found guilty by the jury of the robbery of approximately 7,000 euro (£6,293) in cash and cheques outside Lordship Credit Union.

Mr Donohoe had been on duty at the credit union in Bellurgan when he was shot and fatally wounded.

Brady has denied the murder charge.

Mr Justice Michael White told jurors that a majority verdict on the charge of capital murder will be accepted if at least 10 of them are in agreement.

The charge of capital murder includes an aggravating factor such as murdering a police officer while on duty.

The jury will resume deliberations on Wednesday morning.