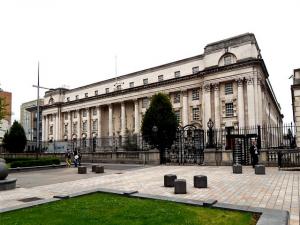 A man charged with murdering his five-year old stepdaughter was refused bail today due to fears he may flee and not turn up for his trial.

Abdul Wahab (32) and his wife Aleksandra Wahab (26) are currently in custody following the death of Mrs Wahab's daughter.

Nadia Zofia Kalinowska died from injuries sustained in her Fernagh Drive home in Newtownabbey on December 15 last year which included a fractured skull and a laceration to her liver.

Earlier this week, Abdul Wahab launched an application to be released on bail. Mr Justice Horner adjourned his ruling until today, when he refused the application.

Mr and Mrs Wahab - from Pakistan and Poland respectively - have denied murdering Nadia and claim she sustained the injuries falling down the stairs in the middle of the night.

The couple also deny charges of causing the youngster grievous bodily harm with intent, and causing or allowing the death of a child.

As he gave his ruling in Belfast's High Court, Mr Justice Horner said he had given careful consideration to submissions made by both the Crown and defence.

Nothing that the case involved the "upsetting and painful" charge of parents accused of murdering a child, Mr Justice Horner said it was the Crown's case that Nadia's injuries were consistent with her being abused and were inconsistent with her falling down stairs.

Also noted by the Judge was the defence's case that Nadia was a clumsy child, that the injuries were accidental and were consistent with falling down the stairs.

Mr Justice Horner determined that at this point there was a prima facie case to answer - but said this may change as further medical reports were outstanding.

He added: "Ultimately it will be up to the jury to determine whether these injuries were inflicted deliberately or accidentally, and they will no doubt inform their view as to whether the injuries which killed Nadia were the result of a fall, or an act of one or both of her parents."

During the earlier hearing, the Crown opposed bail due to concerns that Wahab would abscond and return to Pakistan.

This, the Crown said, included Wahab telling police he wanted to move his family there, and searching for flights in the days prior to the fatal incident.

Mr Justice Horner said that while he accepted that Wahab had no criminal convictions and had settled and was working in Northern Ireland, in his view there was a risk Wahab would abscond and not turn up for trial.

Citing a life sentence if convicted for murder as an "incentive" for Wahan to abscond, the Judge said he noted Wahab's past history with the Immigration authorities - which he said indicated a man who had manipulated the system and failed to disclose relevant information when it suited him.

Mr Justice Horner refused to release Wahab on bail and said no conditions imposed could manage the risk of him fleeing.

He reminded the court that should circumstances change - such as the findings in further medical reports - Wahab would then be entitled to re-apply for bail.

Wahab, who attended the remote hearing via a videolink with Maghaberry, was remanded back into continued custody.