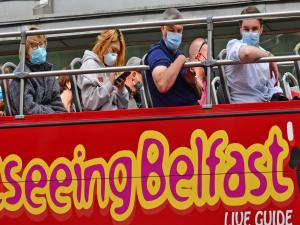 A new rule making face coverings mandatory in shops has been welcomed in a Belfast neighbourhood as a "welcome kick up the backside".

From Monday masks were required to enter enclosed public spaces with a limited number of exceptional circumstances amid the ongoing battle against coronavirus.

It has been welcomed by both shoppers and retailers on the Belmont Road in east Belfast.

Anna McCartney said she thought the rule enforcing the wearing of masks was sensible.

"It's being sensible, I think it is the right thing to do," she told the PA news agency.

"None of us want to do it but it really is the right thing to do."

From today in Northern Ireland, the wearing of face coverings in enclosed spaces such as shops is compulsory.

People who don't comply could be hit with a £60 fine. pic.twitter.com/LLg65wn2gF

Mark Thompson, whose partner is a health worker, said he has been wearing a mask since the start of the pandemic and is glad that more will doing the same.

"I think it's a bit irresponsible if you don't wear a mask, specifically in shops," he said.

"I can understand it on the pavement as long as you keep social distancing.

"And I think in shop the shop keepers are almost scared to say 'put a mask on' because they want return business and need to keep in business.

"My other half works in the cancer centre in the City Hospital so I have been wearing a mask since day one.

"I hope people do catch up (and all start wearing masks), I'm not sure if they have, but a little kick in the backside is not a bad thing."

Business owners said so far most customers had been happy to comply.

Lisa Drennan of the Just For You card and gift shop said it is hard for retailers to know whether to tell their customers to wear a mask if they are not already.

"We'll play it by ear and see how it goes, we're just all trying to help each other by wearing these masks, trying to make sure there isn't another surge of Covid coming up to the winter," she said.

"If everyone plays their part, hopefully we won't get this second wave, and with people wearing masks, at least we feel more protected as staff members."

Craig Stafford, manager of MK Toys and Books, said he felt the guidance is unclear for those under the age of 13.

"That is kind of hard to police in shops, you can't really ask kids 'what age are you', and confirm that, as far as policing it goes, we are just hope people wear masks when they come in," he said.

"I think that wearing masks is important coming up to the flu season so I am glad something has been done but it is still unclear for a lot of people.

"I think it'll take a few weeks for people to get into that pattern of bringing a face mask out with them."

He described trade on Monday morning as "a bit quiet", adding: "I think there will be a section of people who will avoid it and maybe go back to online retail."

Alice Wilkinson, co-owner of Refill Quarter, said she thought the mandatory mask policy was good to ensure more people wear them in shops.

"It just puts everyone in a safer position, staff and customers too, it's unambiguous and I think that's the best way to be," she said.

"So far today nobody has tried to come in without a mask, but it's fair to say it has been quieter so it is maybe putting people off."