New proposed changes to licensing laws signed off by the Executive 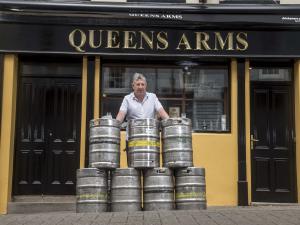 Communities Minister, Carál Ní Chuilín MLA, has announced Executive agreement on proposals that will transform and modernise the liquor licensing law, striking a balance between tackling alcohol abuse and bolstering the hospitality industry.

The proposals will now be included in a Bill which will be taken through the legislative process in the Assembly, before becoming law. They include changes in relation to late opening hours for pubs, Easter trading arrangements, advertising in supermarkets, and special events.

Minister Ní Chuilín said: “On taking up office, Minister Deirdre Hargey outlined that changes to the liquor licensing laws was an Executive priority under the New Decade, New Approach Deal and one that she was keen to progress.  I am pleased to announce that this important legislation is moving on to the next stage.

“I believe these proposals represent a balanced package of measures aimed at tackling alcohol misuse and promoting responsible consumption, whilst providing vital support for the hospitality industry.  This support is needed now more than ever as the industry begins its recovery from COVID-19.

“The changes will also enable local drinks producers to sell their products directly to the public in limited circumstances, make changes to the law affecting registered private clubs and allow changes to  permitted hours at major events, such as last year’s Open golf championship. The amendments will also include new restrictions on advertising of alcoholic drinks and introduce a statutory code of practice on responsible retailing.”

The key proposals include:

The industry body, Hospitality Ulster has warmly welcomed the progress, which when approved by the Assembly will bring about the biggest changes to the hospitality sector in a generation.

This Bill is now expected to enter the legislative process in the Assembly ahead of the Summer recess with progress expected in the Autumn.

🎥Ministers have agreed to change licensing laws in Northern Ireland.

The bill will now go before the Assembly for approval.

Colin Neill from @HospUlster has welcomed the change which will relax opening hours in pubs, bars and nightclubs here. pic.twitter.com/lFOU5DQbKC

“Building on the work of Minister Hargey, the progress of the Liquor Licensing Bill by the new Communities Minister Carál Ni Cuillin is the most significant change to licensing laws in a generation and is an important development at a time when the industry is facing significant challenges as a result of coronavirus.

"We have been calling for these proposed changes which include removing restrictions on Easter opening hours and additional permitted opening hours for some time.”

“This Bill can be a defining moment for the hospitality industry, bringing much of it into line with our neighbours in the Republic of Ireland and in Great Britain and making it more attractive to customers and visitors.”

“It was not so long ago that a Bill to reform our outdated licensing laws was introduced to the last Assembly prior to its collapse. Nevertheless, the world has changed substantially in the intervening period and the latest proposals by the Minister are to be welcomed at this time.

"We are hopeful now that real and meaningful change can finally be implemented.”

“Over the last number of years we have engaged with the five main political parties who gave us assurances that they would support the modernisation of liquor licensing, giving businesses in the sector the means to run profitably and to allow them to reinvest.

"Whilst significant, the proposals do not include everything we asked for, it is crucial now that our MLAs listen to the industry and swiftly make the legislative changes that will transform the industry.”

“Prior to coronavirus, despite being a £2billion a year industry and the backbone of the tourism offer, the growth potential of the hospitality sector was being curtailed by the outdated legislation.

"As we look to rebuild the hospitality sector here after Coronavirus, it is imperative that businesses have all the tools necessary to thrive. Despite the undoubted challenges ahead, this updated legislation would be a welcome boost for hospitality businesses right across Northern Ireland.”