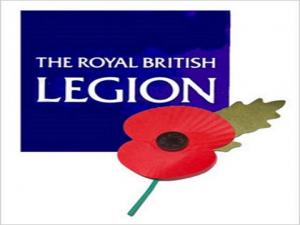 Dozens of wreath-laying ceremonies have taken place across Northern Ireland to mark the centenary of the Royal British Legion (RBL).

Almost 50 of the organisation’s 75 branches in the region are holding events this weekend to celebrate 100 years of the charity, which supports the armed forces community.

In Portadown, Co Armagh, John Robinson, who served in the armed forces from 1971 to 2007, laid a wreath on behalf of the branch’s almost 700 members at 9am on Saturday.

It was one of numerous events that took place in towns, cities and villages across the UK to mark the exact moment of the charity’s formation 100 years ago.

Representatives of the Royal Navy, British Army, Royal Air Force and Merchant Navy laid wreaths at the Cenotaph in London at the same time.

Later in the day a special edition RBL centenary coin was used for the coin toss of the FA Cup final between Chelsea and Leicester City at Wembley.

The Prince of Wales hailed the RBL’s “constant” support of the armed forces community in a video message to celebrate the charity’s centenary.

Charles’s video led a wealth of tributes from service personnel and members of the armed forces community, as well as celebrity supporters including Ross Kemp and Stephen Fry.

Mr Poots said: “The Royal British Legion was formed by and for the armed forces.

“Its constitution was proposed by a soldier and seconded by a general to demonstrate there would be no distinction between rank or political affiliation.

“It has remained true to its objective and supported those in need.

“Throughout Northern Ireland we have witnessed how the Royal British Legion has been a lifeline for the armed forces and our veterans.

“In particular, the many who were maimed physically and mentally through Operation Banner and other conflicts around the world.

“We commend all the volunteers involved in the organisation and celebrate with them on this important milestone.”