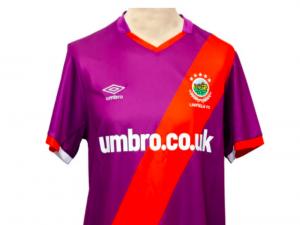 The Linfield kit, which is proving popular with fans. Pic: LFC.

Sportswear firm Umbro has apologised to anyone offended by the new Linfield away kit.

The purple shirt with an orange sash has been likened to the colours of the UVF.

Linfield had previously said any resemblance is coincidental and unintentional.

In a statement on Monday, Umbro said there will be no further promotion of the product on its channels:

Linfield (below) previously said any resemblance is coincidental & unintentional

It appears the Irish League champions have no intention of withdrawing the kit from sale.

Responding to a fan posting pictures of his on Monday, the Blues tweeted:

"Thanks for purchasing. Wear it with pride!"

The adult away shirt was showing as sold out on the club's website on Monday night.

Club chairman Roy McGivern had over the weekend rejected calls for a rethink from MP Stephen Farry.

"This may well be purely coincidental and unintentional, but I do think a rethink would be appropriate. The similarity to UVF colours is too striking. Many other colours and designs are available. Why leave any ambiguity and risk offence to so many?"

"Is this where we are as a society when an elected MP thinks that ordinary every day colours can be owned or monopolised by a paramilitary organisation? Truly staggering and I can assure Stephen Farry that there will be no rethink."

And finally, some good news - a £1,000+ donation to the Hike for Harrie charity effort.

Just incredible 💰👏 Our friends at Bloomfield Fuels have just donated £1,000 for Bereavement Care at RVH Maternity.

Outstanding to see the East Belfast community pulling together for this very worthy cause! 👉https://t.co/N44fWYKkuD #HikeForHarrie 🧗 pic.twitter.com/0AAOfKdP0c