County's refs put through their paces 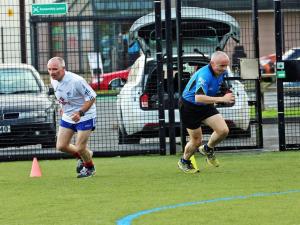 Fermanagh's referees gear up for start of new club championship at the end of this month. Officials are pictured going through practice drills and under-going fitness tests. Hopes high that all involved are sharper than ever as excitement builds for the county's premier club competition.

Excitement may be building ahead of the launch of Fermanagh's club championship..

But there's plenty of hard yards still yet to be put in - just ask the county's match officials.

Members of the Fermanagh GAA Referee Association could be seen at Castle Park in Lisnaskea last week.

They went through Championship practices and also to completed fitness tests before the big throw-in..

That's the Fermanagh Club Championship - due to start on Friday the 26th of August.