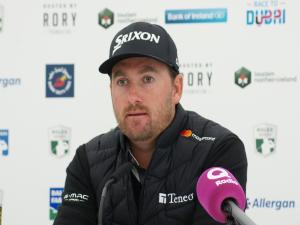 Graeme McDowell's mum says she hopes her son's bid to lift the Claret Jug at this year's Open Championship is successful.

Speaking to Q Radio's Hannah Spratt Marion McDowell said she had no doubt he has the talent to conquer the greens at the famous Royal Portrush links.

She says the support from friends and fans has been incredible...

🎥 Q Radio’s @Radio_Han caught up with @Graeme_McDowell and his mum ahead of @TheOpen at @royalportrush .He attended a charity breakfast for the @RNLI this morning! 🏌️‍♂️ pic.twitter.com/hdFRszj2k0

.@qnewsdesk special at 1 from @TheOpen @royalportrush ⛳️ with @davidhunter7 & @Radio_Han reporting! Hear from @Graeme_McDowell who took some time out of the golf for a @RNLI charity Breakfast this morning! ‘Let’s go make a few quid for your radar’ 😅 pic.twitter.com/DkS0AOlglW

Meanwhile Rory McIlroy and Darren Clarke, both of whom have won the Open are also trying to repeat past performances.

The 148th Open Championship is being held in the north coast resort for only the second time since 1951 and the world’s most elite players will be there.
Tiger Woods has already graced the links in glorious sunshine ahead of four days of competition which begins on Thursday.

This member of @royalportrush has been telling @davidhunter7 the difficulties some players might face this week on the course. pic.twitter.com/d5Kwvy81uT