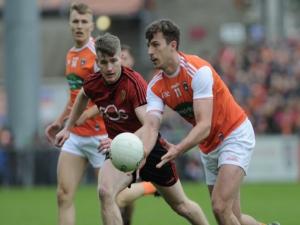 Armagh are through to the semi-finals of the Ulster football Championship after beating Down in a dramatic derby in Newry yesterday.

The Mourne men had Caolan Mooney sent off at the end of the first half but still managed to force the tie into extra-time.

However, a goal from Andrew Murnin in the second additional period saw the visitors to a one-point victory.

It was Armagh's first Championship win in the five years under manager Kieran McGeeney and also the first time they've beaten Down in Newry in 63 years.

They now face Cavan in the Ulster semi-final on 2 June.