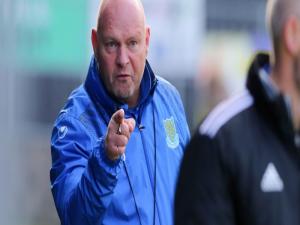 Further details have emerged about a £400 fine for Linfield after their Danske Bank Premiership match at Carrick Rangers earlier this month.

The Irish FA says the sanction is for all spectator issues - including a fan running onto the pitch and abuse during the game.

There had been allegations at the time by Carrick of personal and sectarian abuse by a small number of visiting supporters.

There is no mention of sectarianism in the initial IFA statement on Friday night - or in additional information issued on Saturday following a request from Q Radio. The IFA confirmed on Saturday the £400 fine relates to a number of incidents.

Linfield have not yet responded to the ruling.

Both clubs issued statements on the day of the match...

He was cited for "using offensive, insulting or abusive language and/or gestures" at the match which Linfield won 2-0.

Ex-Blues boss, now Ballymena United manager David Jeffrey, has been hit with a five-match suspension following incidents during and after the recent derby defeat against Coleraine.

IFA statements on both cases below:

£400 fine for Linfield after incidents involving supporters of the Belfast club at the Carrick Rangers-Linfield Danske Bank Premiership match on 7 March.

Linfield’s fine was issued under Article 33.2 of the Irish FA’s Disciplinary Code.

And here is Article 33 in full:

33.1- The home club is liable for any improper conduct among spectators, regardless of the question of culpable conduct or culpable oversight and depending on the circumstances, may be fined. Further sanctions outlined in Article 1.9 of this code may be imposed in the case of serious disturbances.

33.2 The visiting club is liable for improper conduct among its own group of spectators, regardless of the question of culpable conduct or culpable oversight and depending on the circumstances, may be fined. Further sanctions outlined in Article 1.9 of this Code may be imposed. Spectators occupying the away sector of a ground are regarded as the visiting club’s supporters, unless proven by the club to the contrary.

33.3 Improper conduct includes, but is not limited to, violence towards persons or objects, letting off incendiary devices or causing explosions, throwing missiles, the use of laser pens, displaying insulting slogans in any form, uttering insulting word(s) or sound(s), using offensive gestures or invading the pitch.

33.5 The Committee may determine that repeated infringements of Articles 33.1 and 33.2 will attract further sanctions.

The Irish FA’s Disciplinary Committee has imposed bans on Ballymena United manager David Jeffrey and his assistant Bryan McLoughlin for their actions after the Ballymena United-Coleraine Danske Bank Premiership match at The Showgrounds in Ballymena on 7 March.

Jeffrey and McLoughlin will serve four-match and three-match bans respectively for breaching Article 18.7 of the Irish FA’s Disciplinary Code. The charge relates to incidents that happened post-match.

Article 18.7 reads: An official who is reported for the 1st occasion in the playing season for misconduct will be sanctioned with a minimum one match touchline suspension and a £100 fine imposed on the official’s club or in the case of a match official a fine of £100 and may be suspended pursuant to Article 15.15.

David Jeffrey was also dismissed during the Ballymena-Coleraine match after receiving two cautions and he will serve a further one-match suspension. It means he will serve a five-match ban in total.

Both Jeffrey and McLoughlin were reported by the referee for their actions after the match and these were dealt with by way of the Article 18.7 charges.

Please note the Disciplinary Committee has decided payment for fines will not be due until 14 days after the season recommences (normally these are due within 14 days of the charge being imposed).