The Way You Make Me Feel

IRON MAIDEN
& GUESTS
'The Legacy Of The Beast Tour' 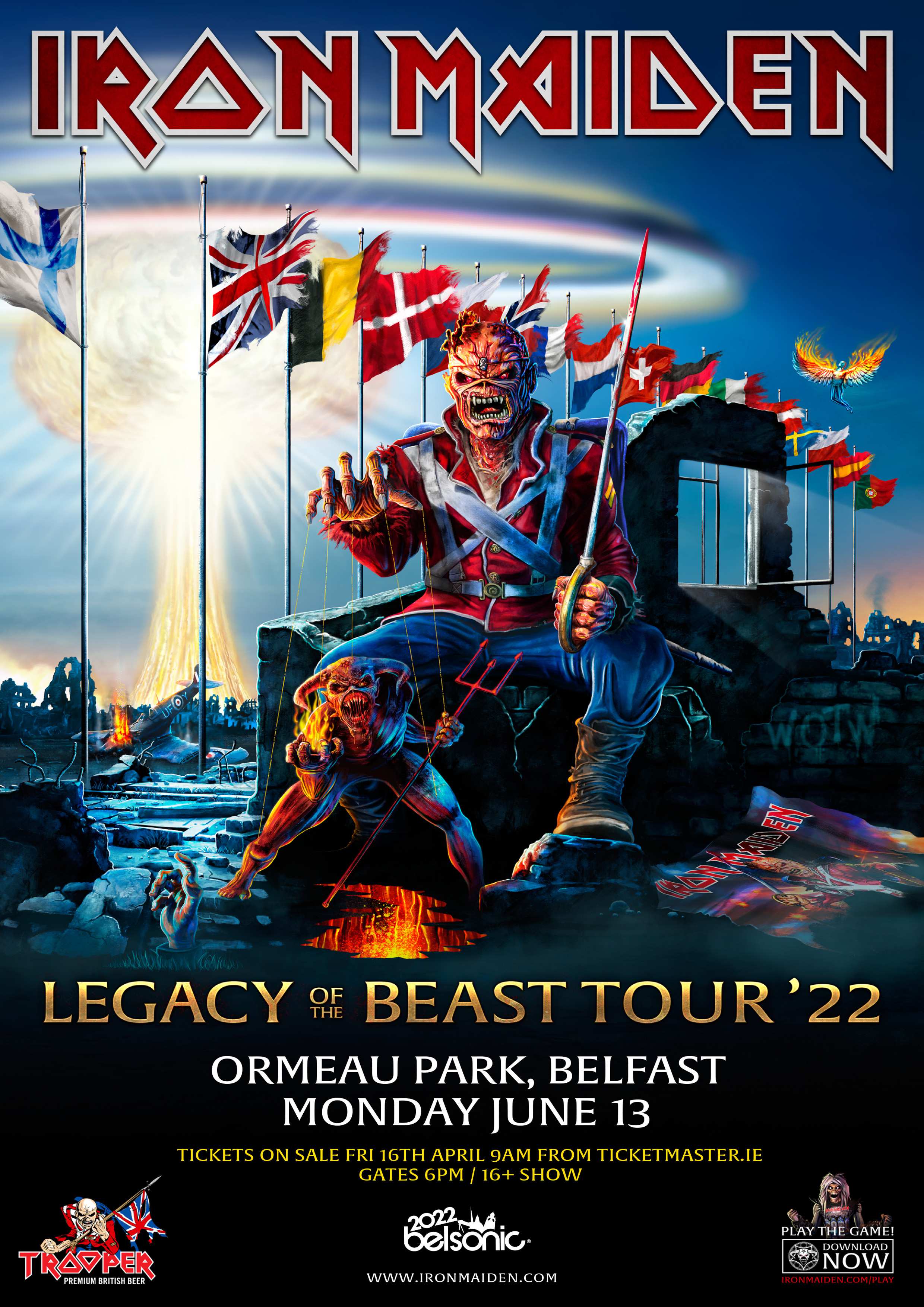 IRON MAIDEN will return to Northern Ireland next year to headline Belfast’s Belsonic in Ormeau Park on Monday June 13th 2022 with their ‘The Legacy Of The Beast Tour’. Maiden will bring 'The Legacy Of The Beast' tour to Belfast in June 2022, based on their award winning mobile game of the same name, which has been deemed by fans and national and rock media alike as 'Maiden's most monumental show and best setlist ever'. With over 90 million album sales, more than 2000 live performances in 63 countries, tens of millions of fans and 16 studio albums of unerring quality and power to their name, Iron Maiden have more than earned their proudly-held status as one of the most influential and revered bands of all time. The band continue to traverse the globe, continually pushing boundaries, visiting new places and returning to cities not played in decades. Sure to be history in the making it’s more than mere proof that the fearsome tenacity that first propelled Iron Maiden into the stratosphere all those years ago is still there. It’s cast-iron confirmation of the heroic, indefatigable qualities that have given Iron Maiden such enduring, universal appeal.

We regret to announce that the IRON MAIDEN 2021 June & July dates on the Legacy Of The Beast Tour have been postponed due to the continuing COVID-19 pandemic restrictions on global live events and travel. The Legacy Of The Beast European Tour will now take place in the Summer of 2022 on the dates below. All tickets remain valid.

The European Legacy Of The Beast Summer 2021 Tour dates have been postponed until 2022 due to the continuing COVID-19 restrictions.

The postponement of the Legacy Of The Beast Tour does however bring the good news that Maiden can now return to headlining the European festival dates initially planned for 2020 which were cancelled due to the pandemic. This includes Graspop in Belgium so therefore the own-show date in Antwerp (which had also not gone onsale) will no longer take place. Furthermore we are in the process of finalising a further couple of own-shows in other European territories and will update you about those as soon as they are confirmed.

Confirmed supports for all own-shows can be found on the Tour information page at www.ironmaiden.com. Where possible these will remain the same as announced for this year.

Manager Rod Smallwood comments; “ Naturally the band are hugely disappointed, a second summer without touring, especially with this very special Legacy show, is very hard to take. They send their best wishes to you all,  knowing full well you fans will feel the same. As we all know, realistically there is no alternative so we will all make the best of it and spend the time preparing for a very memorable and even more spectacular Legacy tour next year, we promise! Until then keep safe and keep smart”


Tickets go on sale Friday April 16th @ 9am from Ticketmaster outlets and www.ticketmaster.ie