Katy Perry has dropped her new track 'Smile', and revealed the album of the same name will be released on August 14th. 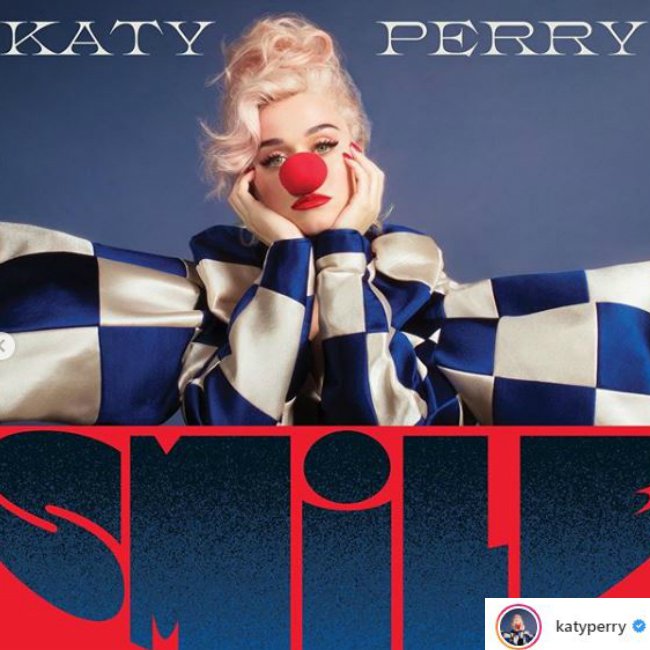 Katy Perry will release her new album 'Smile' on August 14th, after dropping a single of the same name on Friday (10.07.20).

The 35-year-old singer took to her Instagram account to reveal the album artwork, which features her wearing a big red clown nose while looking glum, and revealed she penned the title track while going through "one of the darkest periods of [her] life".

"I wrote the title track from the album when I was coming through one of the darkest periods of my life and had lost my smile. This whole album is my journey towards the light - with stories of resilience, hope, and love. Listen to the song at midnight local time Friday, July 10 and pre-order the album at the link in bio. (sic)"

Katy - who is expecting her first child with boyfriend Orlando Bloom - also admitted she hopes the song 'Smile' will give people "hopefulness", as it did when she was penning the tune.

She added: "#SMILE - the song - is out everywhere now! I hope it can be a few minutes of energizing hopefulness for you as it is for meee (sic)"

Katy's new album will include the already-release singles 'Never Really Over', 'Harleys in Hawaii', and 'Daisies'.

In May, Katy admitted her 2017 split from Orlando - who she has since reconciled with - left her "broken", and she was hoping to feel excited about her record 'Witness', but the album didn't perform to her expectations.

She said: "My career was on this trajectory when it was going up, up and up and then I had the smallest shift, not that huge from an outside perspective. But for me it was seismic.

Listen to the song at midnight local time Friday, July 10 and pre-order the album at https://t.co/BImXF3kEcw ♥️ pic.twitter.com/ElGqae3zVI

"I had given so much out, and it literally broke me in half. I had broken up with my boyfriend, who is now my baby daddy-to-be.

"And then I was excited about flying high off the next record. But the validation did not make me high, and so I just crashed.

"It was so important for me to be broken so that I could find my wholeness in a whole different way. And be more dimensional than just living my life like a thirsty pop star all the time.

"Gratitude is probably the thing that saved my life, because if I did not find that I would have wallowed in my own sadness and probably just jumped.

"But I found the ways to be grateful. If it gets really, really hard I walk around and say, 'I am grateful, I am grateful,' even though I am in a s***** mood."