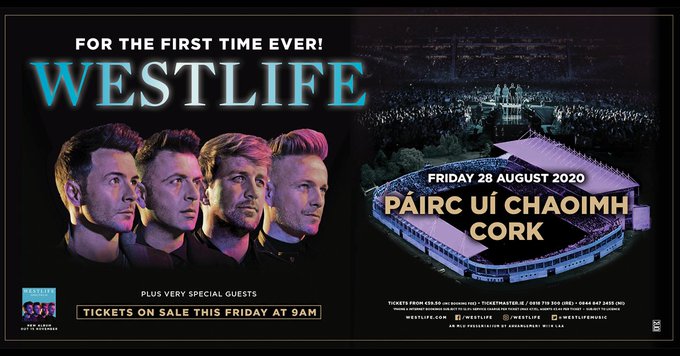 Tickets for both dates Friday 28th August and Saturday 29th August priced from €59.50 including booking fees are on now at Ticketmaster.

Emeli Sandé is the special guest for both shows.

It will be the first time, in the band’s 20-year career, that they have headlined Páirc Uí Chaoimh Stadium. The gig announcement follows the phenomenal success of their comeback which has seen the nation fall in love with the Irish superstars all over again.

On social media, the four-piece tweeted: "We can’t wait to bring this show to Ireland which will be more spectacular than anything we’ve ever done before."

“Headlining Páirc Uí Chaoimh for the first time ever is a dream come true for all of us. We’re incredibly excited for a show which will be different and more spectacular than anything we’ve ever done before”, say the band.

The spectacular concert will see the global pop kings perform their greatest hits including 'Swear It Again', ‘Flying Without Wings’ and ‘You Raise Me Up’ as well as new songs from their forthcoming album.

Westlife are the first Irish act to ever play multiple shows at the Cork stadium. The band have said this will be their only Irish summer show in 2020.

Ireland. Get ready. Our only Irish summer show will be in Cork in 2020! It’s gonna be incredible. #westlife #dreamscomingtrue

Last Friday, Westlife announced they will headline Wembley Stadium, London, UK on 22 August, making them the second only Irish act alongside U2 to achieve this.